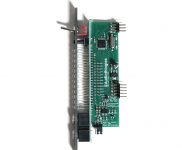 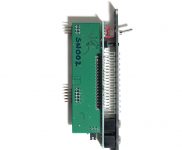 At its heart, a very accurate frequency counter can measure the pitch of the incoming signal and calculates the offset vs the nearest perfect tuned note.

Here’s a video showing both modes at the same time. On the left, strobe mode, on the right, calibration mode.

In addition to the tuner, CED can also be used as a square wave sub octave generator.
It can deliver a 10V PP square wave signal 1 or 2 octaves below the input signal.  The octave is controlled by the octave switch located on top of the module.

The sub sound is quite classic, but things can get interesting when fed with complex waveforms, like in this example:

Don’t need a sub output? Fancy a thru output to save on multiples? CED has 2 internal jumpers allowing you to turn the module into a tuner only module with passive thru output.
In this case, the octave switch function is re-allocated to a bypass function for the tuner, so we made the front panel reversible to show the new behavior. 2 modules in 1 – nice, isn’t it?

The input jack is where you connect your input signal.
The controls are not the same depending on the jumper settings

The mode button will switch between strobe and calibration mode.
A 2s press on this button will bypass the tuner (can be useful when playing, as the LEDs moving can be distracting).

The octave switch switches the sub output from -1 to -2 octaves.

The sub jack is where you’ll get your square sub waveform.

The mode button will switch between strobe and calibration mode.

The switch bypasses the tuner.

The thru jack should be self explanatory.

These settings can be changed according to your needs

To access these settings, press mode while powering your modular system.
All LEDs will flash 2 times, release mode. You are in user settings mode.

To save your settings and return to normal operation, hold the mode button for 2s.

Warning: CED is based internally on a frequency counter, as such, it is not capable of calculating the pitch of complex waveforms or mix of raw waveforms
However, it’s not a “dumb” frequency counter, it’s been tailored to offer the same great accuracy over the whole audio range.

#micromonsta2 is now out and available

Sign up to our newsletter to get updates about our products
We will only send new product annoucements as well as important updates about current products. (no back in stock notification in the newsletter)